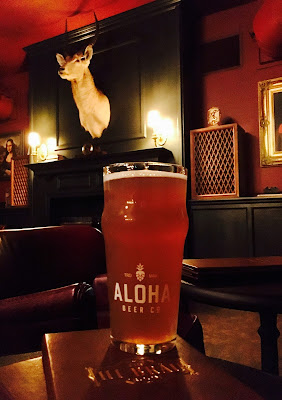 The Hi Brau Room is one of Honolulu’s new speakeasies, located above the Aloha Beer Company on Queen Street. Having had their beers at PokeFest, it was a must to go try their new gose, a variation on their original gose from 2013. Aloha Beer Company used to be located along Nimitz as part of Sam Choy’s Big Aloha Brewery, which closed that same year making the gose one of their last beers. Having met owner and brewmaster Dave Campbell at PokeFest, I asked him about the new beer. He said it was their aim to make the gose as authentic to the original European varieties as possible. He said these original goses had a high salinity creating a tartness, not a sour taste as many modern ones are. The water was collected off of the makai pier of Waimanalo Bay on O’ahu’s east shore, hence the name Makai Pier Gose. I loved the beer; it was tart but with a slight saltiness that lingered on the lips. The Hi Brau Room itself is a chill and comfortable place for a beer or cocktail: big leather chairs, fireplace, stuffed animal head, cozy lighting, gold curtains, and a colorful yet classy bar.  The noise of a Saturday night was just fun and jovial.  I definitely hope to enjoy more beers here with friends!