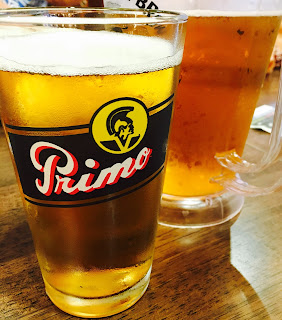 This evening we went to Shirokiya Japan Village Walk, which is a must visit for anyone in Honolulu. Beyond the food, you’ll find $1 beers, which is a fun relief from the paradise prices of most goods.  One of the brands they offer is Primo, which is my go to when eating here. It’s a crisp refreshing lager, very traditional and perfect for the hot local weather.  When I was learning about here, I was interested about its history; especially since I just kept running into references to the historic beer.

For any beer lover visiting Hawai’i today, it’s impossible to go to the bars, restaurants, and stores of the islands without running into Primo Island Lager. It claims to be Hawai’i’s original beer, and in a loose sense it is. No longer brewed locally, it has had a resurgence in popularity since 2007 when Pabst Brewing Company decided to bring back the brand after years of absence.

But we’re jumping ahead. After many false starts, and on a very small scale, local Hawaiian breweries weren’t doing well. Honolulu Brewing and Malting Company was founded and released the first Primo on February 13, 1901.  For those interested, the original red brick building still stands on Queen Street near the Punchbowl intersection across from Kawaiaha’o Church Cemetery.  It was the most popular beer of the time, up until prohibition. After prohibition ended in 1933, Hawaii Brewing Company was formed and re-released Primo from its new facility a few blocks away. In the ensuing decades, Primo gained popularity and moved to larger facilities. Under its owner Schlitz Brewing Company, its most popular point was in 1969 when it held 70% of all local beer sales. Schlitz only partially brewed the beer here, which may have caused anger among its customers. With tremendous competition of the macro breweries, Primo took a nose dive. 1979 saw the last locally brewed Primo.  Stroh bought the recipe and brand in 1982 and tried to market it until its ultimate end in 1998.  Pabst acquired the rights in 1999 but just held them until 2007.  The modern marketing push can be attributed to the return of the original label, bottles, and recipe. Although brewed in Los Angeles, it does have Hawaiian roots.  At antique stores and collectible shows in the islands today, you’ll find a plethora of Primo marketing material from its history: metal signs, bottles, openers, caps, posters, and bar items.